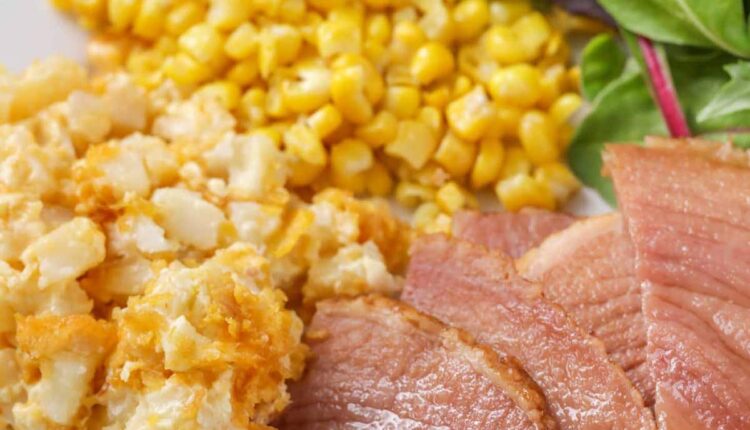 This crock pot ham is made entirely in the slow cooker for quick prep time and minimal effort. With a delicious sweet brown sugar glaze, this is our favorite way to make ham for the holidays!

Ham is one of those foods we don’t usually eat on an average weeknight. Sometimes we eat it for Sunday dinners, but you better believe it’s always on holiday dinners!

This is the juiciest and sweetest ham you’ll ever eat. A delicious glaze made with brown sugar and pineapple juice, it’s impossible for everyone not to love it! The best part? It’s so easy to do! ! Most of it is done in a crock pot, which makes it even better!

How to cook ham in a crock pot:

As mentioned, this ham is made in the slow cooker, meaning easy! ! Before throwing it in, the first step is to determine what type of ham to use and how much to use!

What type of ham should I use?

There are several different types of ham, and while they all work well for this recipe, some may yield better results than others. When you’re at the grocery store, be sure to check the packaging – it will say exactly what type of ham it is!

For this slow cooker ham recipe, we prefer to use precooked whole (not spiral cut) boneless ham that has been cured or cured and smoked.

Cooking Ham in a Crockpot

Once you have the perfect ham, you will place it in your slow cooker with your glaze and cook for about 2-3 hours until it is heated through (the meat thermometer reads when inserted in the thickest part 140°).

Once the ham is heated through, remove it from the crock pot, slice it, and place it back in the crock pot with the cooked glaze. Continue to cook on warm/low heat for an hour.

This glaze may be simple, but it has a lot of flavor! It is very sweet to complement the taste of the meat. Only three ingredients are needed:

Just bring the ingredients to a boil in a saucepan, stirring occasionally. Pour over the ham, cook for a while in the crock pot and you’re ready to go. This brown sugar ham glaze is amazing!

Depending on how big your saucepan is, it may only hold 7-8 pounds of ham. So if you need more to feed your crowd, you may need to borrow an extra crock pot or two!

If you know you’ll be using it in a recipe that calls for diced ham, like scalloped potato ham, ham and bean soup, or cheesy ham chowder, you can diced it before putting it in the fridge for easy on-the-cook recipes!

How to reheat? You can always put it in the microwave for convenience, but if you don’t like that, you can wrap the slices in foil and put them in a 275°F oven until they’re heated.

For more ham recipes, check out: