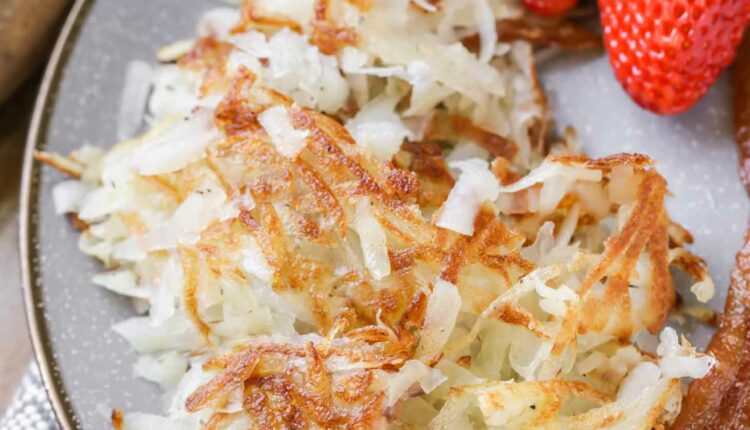 No breakfast is complete without delicious golden hash browns! Never done it? Read this article for an easy how-to!

Hash Browns are one of the best breakfast side dishes – similar to breakfast potatoes! Once you learn how to make them yourself, you can serve them with pancakes and eggs, or use them in casseroles and breakfast burritos.

Hash Browns are a breakfast staple in our house. We love putting them on eggs, bacon, pancakes, waffles, toast, you name it! They are super easy to make and only take a few minutes to make.

If you’ve never tried making your own hash browns, you’ll be pleasantly surprised by how easy they are. The hardest part might be peeling the potatoes, but we let the kids help.

These can be done in 10 minutes. You can make them ahead of time, freeze them, and warm them up in a pan when you want hash browns and breakfast of your choice. Say no to store-bought hash browns and eat homemade — so much better, I promise!

How to Make Hash Browns

Peel and rinse. Start by peeling all the potatoes. Rinse them well and shred them with a cheese grater – watch your fingers!

soak. Next, fill a large bowl with cold water. Put the potatoes in water to help remove some of the starch. Drain the potatoes and pat them dry with paper towels to remove excess moisture.

Cook. Heat a pan over medium heat. Add butter and melt. Add potatoes to skillet in a single layer. Then let them cook until browned (about 5 minutes). Flip the potatoes over and cook on the other side until browned.

season. Season hash browns with salt and pepper. If you want to add a little spice, you can sprinkle with a little paprika and paprika. Um, right? ?

Want the perfect hash browns that aren’t soggy at all? Here are some tips and tricks you should keep in mind!

Freeze later: You can’t freeze raw potatoes (or they’ll turn out gross!), but by following these easy instructions, you can make great frozen hash browns to cook later, or to use in other recipes.

Chop and soak potatoes as usual following the recipe. Drain the potatoes and blanch them in boiling water for about 3 minutes. Immediately drain and rinse with cold water (so they don’t continue to cook), pat dry, and place in freezer-safe storage containers or bags.

Serve homemade hash browns next to: